This year, we are excited to be partnering with MassMutual to honor the accomplishments of black leaders who are inspiring a generation of black innovators, as well as to celebrate our Youth STEM initiatives over the past year. Other major sponsors of the event include our Visionary level corporate partners – Liberty Mutual Insurance, Amgen, and Mayflower Wind.

The 2022 Inspire STEM Gala will take place on Saturday, March 19th at The Ritz-Carlton, Boston. We are excited to kick off this year’s fundraiser with a VIP welcome reception sponsored by MassMutual, followed by the gala awards dinner and awards ceremony. Attendees at this year’s gala will participate in fundraising activities, directly benefiting our NSBE Boston’s STEM initiatives. View the schedule of events, 2022 honorees, scholarship recipients and list of sponsors – www.inspirestemgala.com

Thanks to the amazing NSBE Boston community of supporters and sponsors, our 2022 Inspire STEM Gala will award over $50,000 to deserving Black students in the Boston area. Learn more about ways to give to our Inspire STEM fund and also attend the Inspire STEM Gala networking finale –  www.inspirestem-2022.eventbrite.com 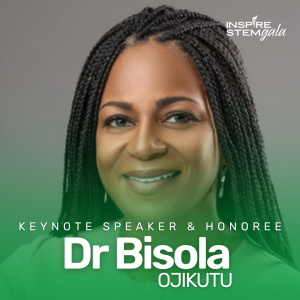 The keynote speaker for the event, Dr Bisola Ojikutu, is a nationally recognized physician leader, health equity researcher, community advocate and expert in the prevention, care, and treatment of infectious diseases.

Dr. Ojikutu was appointed Executive Director of the Boston Public Health Commission (BPHC) in September 202. Prior to this, she served as a Senior Advisor at John Snow Inc, where she directed a  $30-million project to improve HIV care and treatment to countries in sub-Saharan Africa and Latin America; and as the Director of the Office of International Programs at Harvard Medical School.

Dr. Ojikutu graduated from Johns Hopkins School of Medicine. She completed her internal medicine residency at New York Presbyterian Hospital-Cornell and Infectious Disease Fellowship at Massachusetts General/Brigham and Women’s Hospital. She is a former Commonwealth Fund Fellow in Minority Health Policy and has a Master’s in Public Health in Health Policy and Management from the Harvard School of Public Health. She is board certified in internal medicine and infectious diseases and is a Fellow of the Infectious Disease Society of America.

NSBE Boston Professionals is proud, not only to have Dr Ojikutu speaking at this commemorative event, but also to present her with the prestigious Trailblazer Award.

Deborah Jackson is the President of Cambridge College and has been since May 2011. Under her leadership, Cambridge College has been recognized as one of “America’s Top 100 Graduate Degree Producers” as noted by Diverse Issues in Higher Education Magazine; their School of Management ranked third in awarding master’s in business/commerce degrees to African-American students, higher than any other private, non-profit college in the nation; and has been designated a Military Friendly School helping U.S. veterans attend college.

Prior to joining Cambridge College, Ms. Jackson served for nearly a decade as CEO of the American Red Cross of Eastern Massachusetts, one of the nation’s largest Red Cross units. Prior to that, she served as vice president of The Boston Foundation, where she managed a $50-million grants and initiatives program; as senior vice president at Boston Children’s Hospital; and as president and CEO of Morgan Memorial Goodwill Industries, Inc.

Ms. Jackson has served and continues to serve on numerous commissions, task forces and boards including the Boston Green Ribbon Commission; the Mayor’s Task Force to Eliminate Racial and Ethnic Disparities in Health Care; the “City to City” program focusing on national and global best practices for urban policies; the American Red Cross National Diversity Advisory Council; Eastern Bank and the Eastern Bank Charitable Foundation.  Ms. Jackson served for over 15 years on the board of the American Student Assistance Corporation, the nation’s first student loan guarantor agency; and has been on the boards of Roxbury Community College, Boston College Carroll School of Management Advisory Board, Northeastern University Corporation, Milton Academy and Harvard Pilgrim Health Care.  She also serves as Vice Chair on the Board of Directors of the Association of Independent Colleges and Universities in Massachusetts, and is a board member of the New England Chapter of The National Association of Corporate Directors.  In May of 2014 she received an Honorary Doctor of Humane Letters Degree from Curry College 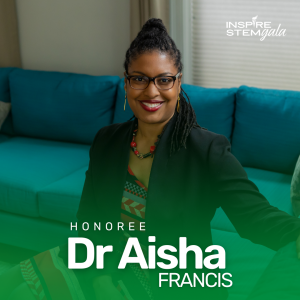 Aisha Francis, Ph.D., was recently named the President and Chief Executive Officer of Benjamin Franklin Institute of Technology after initially serving as Chief of Staff beginning in 2018. She is pleased to advance the mission of this minority-serving, non-profit technical college based in Boston, MA. This role is an exciting return to the field of higher education for Dr. Francis, who began her career as a college lecturer and adjunct professor. She earned her doctorate in English Literature from Vanderbilt University after graduating from Fisk University and is proud of both her Nashville and Dominican roots.

The entirety of her professional career has centered on increasing access to education for underserved populations, although she worked across various fields for the past 20 years. In Boston, Aisha previously held leadership roles at Boston Medical Center, the John F. Kennedy Library, and Harvard Medical School. Aisha is an educator at heart with broad-based experience in philanthropy, change management, and communications. She believes in the collective ability of healthy organizations and well-supported individuals to transform communities negatively impacted by systemic racism and other forms of entrenched injustice. Her leadership roles in board relations and governance, strategic planning, and resource development have underscored her ability to develop trusted relationships and implement programs with significant local and national impact. Aisha is also a civically involved Boston Public School parent who lives in Hyde Park with her husband and two children. 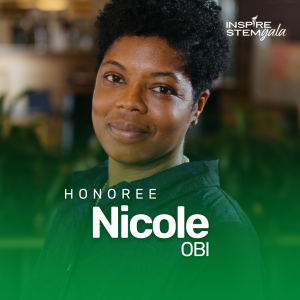 Nicole Obi is the President and Chief Executive Officer of the Black Economic Council of Massachusetts (BECMA). Previously Vice President, Member Experience & Engagement for BECMA, Nicole Obi believes racial equity and justice are critical to realizing a productive and positive society. Nicole Obi grew up in Framingham Massachusetts and attended Hampton University, a historically Black university, and then the Massachusetts Institute of Technology for dual graduate degrees from the Sloan School of Management and the School of Urban Studies & Planning.

After co-founding two venture-backed start-up firms and then leading a strategy consulting firm for seven years, she joined Fidelity Investments in 2007 as a Director within the strategy consulting group. She transitioned from consulting to establishing a first-of-its-kind customer function within the retail business at Fidelity. Obi left Fidelity in 2018 as Vice President of Customer Insights & Engagement Strategy. 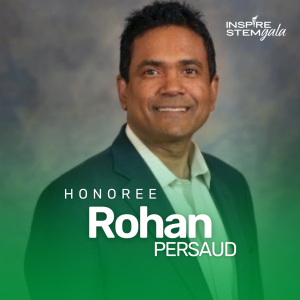 President’s Award for Excellence in Leadership and Diversity Recipient

Rohan Persaud is an Executive Director at Amgen responsible for the overall startup and licensure of their Next Generation Bio-Manufacturing Plant. With over 30 years of pharmaceutical manufacturing and startup experience, Rohan first joined Amgen in 2016 at the Singapore site where he was responsible for the startup of Amgen’s first synthetic manufacturing plant. Prior to that, he served as site vice president for the Ferring Pharmaceutical USA plant in Parsippany, NJ and spent 22 years at Merck and Co. where he held positions of increasing responsibility. He led both in-line manufacturing and start-up for chemical synthesis, bulk vaccine, solid dosage, sterile formulation and filling and packaging. His experience at Merck covered several countries including the USA, India, Singapore and Ireland. Rohan has a passion for building and leading teams and is champion for safety. He holds a B.S. in Chemical Engineering from Columbia University in NYC. He lives in RI with his wife and youngest son, and enjoys visiting his two older sons in NYC. Rohan enjoys all sports and is an avid cricket fan and enjoys traveling. 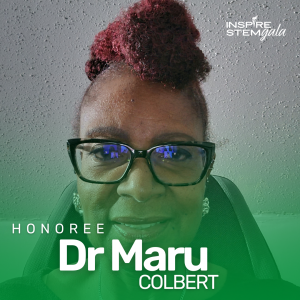 She has been a Sr. Lecturer/ Professor/Researcher for over 30 years. She has a patent and several “named” senior research appointments/fellowships, visiting scholar positions and teaching awards-one international.  Through her five alma maters and several personal partnerships she leads activity groups and does volunteer work in STEM, the arts and entrepreneurship. A professional challenge she has made personal is adding practice elements to her MIT and related research, combining chemical engineering and urban renewal with environmental and educational justice.

She is a published author and is using her “COVID hiatus” from international research to complete a textbook, continue a leadership series for Postdoctoral and Early Career Women of Color co-developed with the Director of the MIT Energy Initiative for the Association for Women in Science and a theater arts project.  Maru has been a member of NSBE since her undergraduate days at Cornell University.  Positions she has held in NSBE-Alumni (now Professionals) include Programs Chair, Regional and Local EJSIG Chair, chaperone for both MIT Collegiate and NSBE Jr. and recently, the local Scholarship Board.

This year we will be honoring the incredible accomplishments of thirty-nine collegiate and high-school students through the NSBE Boston Inspire STEM scholarship. The STEM scholarships are funded through a collaboration of our sponsors, the generous donations of our members and all the other supporters of the NSBE Professionals mission to graduate 10,000 black engineers every year by 2025. We are thankful to the Circle of Excellence sponsors, our community, and Inspire STEM Scholarship corporate supporters for making this year’s scholarships possible.

Did you know that black and brown students make up less than 10% of graduates from STEM programs each year? Proceeds from this event will help fund additional programming and initiatives to ensure a bright future for black and brown students in STEM. We invite the community to get involved and  join us in raising over $100,000 to expand the pipeline of “culturally responsible Black Engineers who excel academically, succeed professionally and positively impact the community”. Donate today at inspirestemgala.com. Opportunities to donate will also be made available during the gala.

As always, NSBE Boston Professionals thanks our corporate sponsors, partners, members, distinguished guests and attendees all your continued support of our mission. Special thanks to our 2022 Circle of Excellence sponsors: Liberty Mutual, Amgen, Mass Mutual and Mayflower Wind. See the full list of our 2022 Inspire STEM Gala sponsors – here. 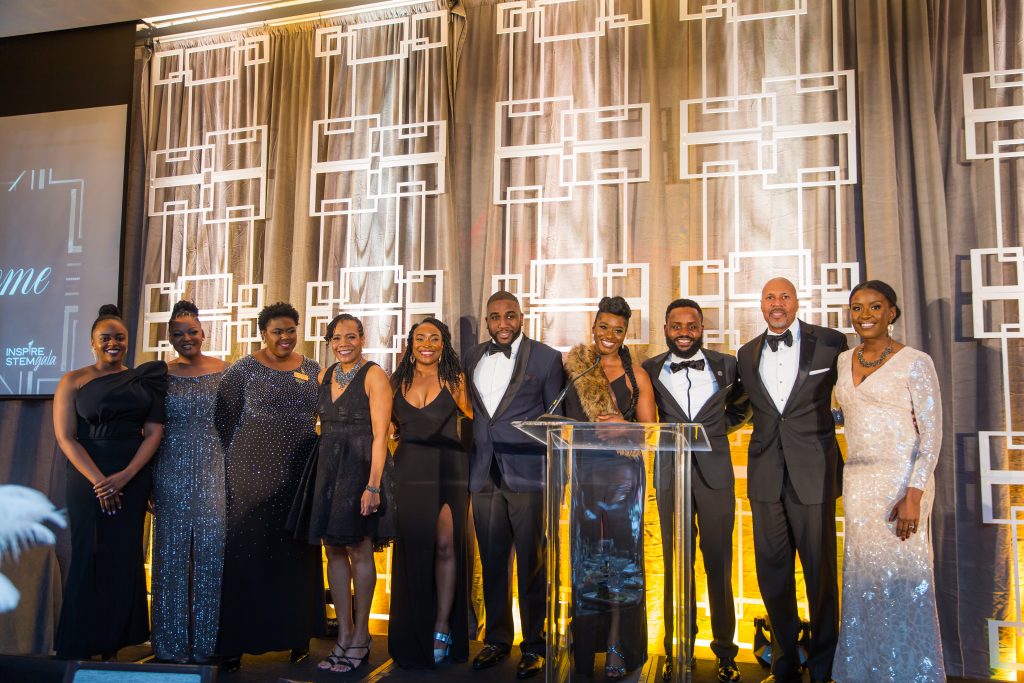